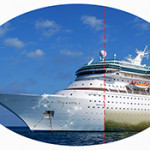 In order to prevent and control the fouling of these surfaces, the use of anti-fouling coatings can be a suitable option, although several factors should be considered when choosing these coatings. However, harmful chemicals and toxic substances have been used in some of these coatings, which have harmful effects on the marine environment. Meanwhile, nanotechnology offers an effective solution by creating environment-friendly paints.

Marine structures armed with anti-fouling nano-coatings
Blue Ocean Nano-Paints and Coatings Company has succeeded in producing fouling-remover nano-coatings for the first time in the country. This product is a nanotechnology-based hybrid intelligent coating that can be used as an environment-friendly coating and compatible with the marine ecosystem in order to prevent fouling of the surface without using biocides.

This product is used as a paint on a variety of structures in marine environments, including docks, surface and subsurface watercraft, military boats, and coastal structures.

In order to produce fouling-remover nano-coating, after implementing laboratory stages, including testing, designing, and manufacturing laboratory samples and conducting necessary tests, the company performed field tests in two time intervals (for more than 5 years) and then, launched the industrial product line.

After completing the necessary steps, the company obtained a nano-scale license from the Nanotechnology Innovation Council in 2018 (1397).

Green product with unique features
Fouling-remover nano-coatings produced by Blue-Ocean Nano-Paints and Coatings Company are smart coatings with a smooth, slippery surface and low friction. Compared to anti-fouling non-nano coatings, these nano-coatings have more advantages, including lack of any type of biocide inside the coating, reduced fuel consumption in watercraft, lack of decreasing watercraft speed, reduced corrosion rate, increased speed and efficiency of watercraft, as well as fewer number of ducking operations for watercraft and ships.

The use of nanoparticles in these coatings improves its physical and mechanical properties, including wear resistance and tensile properties.

The fouling-remover nano-coatings and paints (FRC) of this company, with a lifetime of 5 years, have a higher useful life than that of other commonly used coating systems, and performance and surface properties similar to the skin of sharks and dolphins body, due to their hydrophobicity, high tensile properties, and smooth surface on a nano-scale.

The nano-paints have a competitive advantage in terms of quality and price. These products will be associated with high cost-effectiveness and productivity in the industry of marine colors, anti-fouling, and corrosion-resistant products.

Learn more about the fouling-remover nano-coating manufacturing company
As a manufacturer of knowledge-based marine paints of the country, Blue-Ocean Nano-Paints and Coatings Company designer of a variety of new industrial coatings and anti-corrosion primers such as Zinga, hybrid coatings, and surface cleaning nano solutions with a lifetime of 15 years, has managed to record several inventions in the field of smart coatings and marine and industrial Nano hi-tech, as well as and nano-quantum.

For the first time in the Middle East, Blue-Ocean Nano-Paints and Coatings Company has been awarded International Certificate of Marine Coatings Compliance with IMO Criteria and Marine Environment (Type Approval) from the International Bureau Veritas (BV) Rating Institute in France, which has the first rank in the IACS. It is worth noting that the company received a Type Approval Certificate from the Iranian Ranking Institute in 2018 (1397).

According to the officials, the company has a daily production capacity of 30 tons of nano-coatings.

The company has managed to directly employ 15 to 20 people through its industrial and production activities.

For more information on fouling-remover nano-coatings produced by Blue-Ocean Nano-Paints and Coatings Company, visit the website of this company in Iran Nanotechnology Products Information Center.