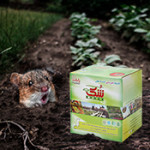 They are everywhere!
Mice are among the smartest mammals, living in rural and urban areas with and near humans. The most important species of mice include rats, brown rats (Rattus Norvegius), moles, rodents, and house mice.

To estimate the number of mice in any region, we should multiply the number of mice observed by 20! The average gestation time of a mouse is 21 to 23 days. They can be pregnant and give birth 4 to 6 times a year and add 6 to 12 baby mice to the family after each pregnancy.

Of mice and men!
The most important hazards of man and mice living near each other is the transmission of 35 dangerous common diseases such as plague, typhus, and leprosy that can be transmitted via rats and mice’s urine, feces or saliva and the fleas that live on their skins.

It is worrisome to find a mouse in your house or at work. They can transmit diseases while searching for food or shelter. This can be a real danger to humans, especially in kitchens or places where children play. In addition, the habit of constant chewing of mice means that mice can harm buildings, furniture, and household devices.

There are plenty of ways to get rid of mice, the most common of which is the use of poisons and rat traps. Using different poisons can harm the underground and surface sources of water. They can also cause poisoning of humans or the death of pets. Hence, the production of non-poisonous rodenticide has always been of great importance to researchers.

Nano helps you to get rid of mice!
Rayan Zarin Sina, a knowledge-based company, has succeeded to invent a non-poisonous Nano-powder rodenticide (Shock) and massively manufacture this product for the first time in Iran. This unique product lacks chemical poisons dangerous for humans, environment, animals, birds, soil, plants and other living creatures and the consumer can safely use this Nano-powder to get rid of mice.

This product consists of spray Nano-powder calcium sulfate, alginate, plant gelatins, minerals, proteins, fat, etc. in different flavors which are packed in 100-gram packages after being processed through Nanotechnology.

The impact of this product is such that the mouse goes to its shelter after eating it, and it causes the blockage of the digestive system and cardiac arrest. This rodenticide powder can be widely used to kill rats in farms, groves and food storages. In general, Shock non-poisonous Nano-powder can be used in farming and gardening areas, manufacturing units and closed areas such as silos and storages, animal husbandries and chicken farms, factories, stores, shops, and other closed areas.

Does it have the required certificates?
The non-poisonous Nano-powder rodenticide (Shock), a product of Rayan Zarin Sina, has acquired certificates from Ministry of Health and Medical Education, the Department of Environment, Iran Plant Protection Organization, Nano-scale certification of Iran Nanotechnology Initiative Council, and confirmations from the University of Tehran and Azad University of Falavarjan.

Know more about non-poisonous Nano-powder rodenticide
This product consists of quasi-spherical Nano-particles of the approximate size of 48 Nano-meter of a certain component and has a high surface-to-volume ratio and, consequently, the high chemical reactivity of Nano-particles results in better functioning of the product.

The use of Nano-technology leads to the empty spaces being filled by Nano-particles and the powder being stuck together, therefore, the animal cannot separate them, causing faster effectiveness of the product as well as a reduction in consumption.

The powder particles used in this rodenticide is not combined with food, but the use of Nano-technology and the change of powder to Nano-particles cause it being sticky and therefore, the powder is easily absorbed in all different kinds of food. This way, it will be impossible for the mouse to separate the powder from the food. Moreover, in the Nano-powder condition, the calcium sulfate is freed up faster and, when combined with the moist in the mouse’s stomach, causes its fast death.

Rayan Zarin Sina knowledge-based company, after seven years and passing various phases of experiments, studies and the production of pilot products and its commercialization and spending around 400 million dollars, has now reached the annual sale of 50 tons of the product.

Rayan Zarin Sina Company has completed the primary consultations with Australia, Canada, Netherlands, Iraq, and Turkey for the export of Shock non-poisonous rodenticide and is seeking to acquire the necessary certifications to export the product.

Municipalities, Iran Plan Protection Organization, Astan Quds Razavi, a large number of storage houses in the ports of Iran, medical and veterinary pharmacies, a number of poison stores all over Iran, including Tehran, Mashhad, and Isfahan are amongst the buyers and consumers of this product.

It is noteworthy that this powder must be kept away from water and humidity and in dry places. It is also better to use gloves when using the product. This product cannot be combined with food or other materials. Moreover, although eating this product or its contact with human skin is not poisonous, it is better to avoid such cases.

To know more about non-poisonous Nano-powder rodenticide, the product of Rayan Zarrin Sina Company, you can visit http://nanoproduct.ir/product/2384.