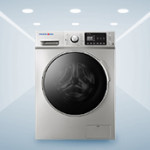 Currently, a primer coating called "ED" (Electro Deposition) has been used to insulate washing machines, which requires the use of a substrate called "conversion coating". This coating has been reacted chemically with the surface of the metal forming a thin film between the metal and the coating, which creates two characteristics of corrosion resistance and paint adhesion.

For the time being, this technology has been applied in the production of Pakshoma's washing machines and the specialists of the company, in collaboration with Schiller Company as a manufacturer of these types of coatings, have created a transformation in the substrate of their metallic painted products over the past two years.

This nano-coating is durable over the entire life of the machine and maintains corrosion resistance continuously.

According to the experts of this domestic company, the purpose of this project is to use the many advantages of Nano zirconia versus zinc phosphate. Reducing the thickness of the nano-substrate coating, which provides better adhesion to the paint and corrosion resistance, as well as reducing direct and indirect costs (at least 20 to 25 percent) are as the main advantages of using this technology. Lack of making sediment, sludge and waste during the production process, saving water consumption, and the ability to coat all kinds of iron, aluminum and galvanized pieces are among the other advantages of using Nano zirconia coatings. It is also known as an environmentally friendly coating and a green substance because of its lack of heavy and harmful metals.

It should be noted that regarding the use of this technology in the substrate of the paints in the washing machines, it is not possible to identify and recognize this nano-coating by customers, while it can be identified in reference laboratories.