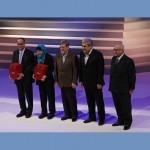 TEHRAN (INIC)- Mustafa (PBUH) Prize award ceremony took place in Tehran on 25 December 2015 in the presence of a number of scientists from the Islamic world and the Iranian authorities, policymakers, scientists and economists.

Professor Jackie Y. Ying, Executive Director of the Institute of Bioengineering and Nanotechnology of Singapore and Professor Omar Yaghi, Co-Director of Kavli Energy Nanosciences Institute and faculty member of University of California, Berkeley, were the laureates in the fields of nanobiotechnology sciences and nanoscience and nanotechnology, respectively.

Prof. Jackie Ying, a Muslim Singaporean scientist, was awarded in recognition of her efforts to develop stimulus response systems in targeted delivery of drug in the field of nanobiotechnology. These systems are consisted of polymeric nanoparticles, which auto-regulate the release of insulin therapeutic depending on the blood glucose levels without the need for sampling. The technology was firstly developed in her knowledge-based company and is now being commercialized in big pharmaceutical firms to be at the service of human health.

Prof. Omar Yaghi, a prominent Jordanian chemist, was also selected for his extensive research in the field of metal-organic frameworks (MOFs) in the category of nanoscience and nanotechnology. The MOFs have a wide range of applications in clean energy technologies, carbon dioxide capturing and hydrogen and methane storage systems due to their extremely high surface areas.